Review of ‘The others’

The Others, directed by Alejandro Amenábar, released in 2001, involves actress Nicole Kidman, who plays the role of Grace Stewart, mother of two children, Anne and Nicholas.

At the beginning of the film, we see the family move into a new, particularly large, house. Upon the arrival of the three servants, Bertha, Lydia and Edmund, the woman explains the complicated situation in which her children find themselves due to a skin disease, which prevents them from exposing themselves to sunlight; for this reason, the curtains must remain strictly closed and every time you enter a room the door must be locked. 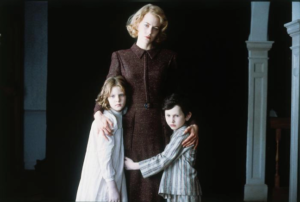 Grace is a very stressed woman, devoted to religion and the education of her children; her husband left for World War II many months earlier and never returned. We see a lot of tension and concern in the walls of the house with music and sound effects known in thriller and horror movies. Among the findings of photos of the dead and suspicious noises, the family is very frightened, but not the servants, but it turns out that they worked there for many years until tuberculosis arrived and forced them to flee.

The little girl, Anne, is the one most involved in the noise issue, often seeing this little boy named Victor with his family; her mother does not believe her, in fact she is put in detention; then she realized through ambiguous sounds of the piano and loud noises from upstairs that Anne was not completely wrong. There are many twists and turns that amaze the viewer, being indeed a classic to be seen absolutely. Particularly interesting with the presence of the supernatural and mysteries, especially on the part of the servants, who do not seem to tell it right.