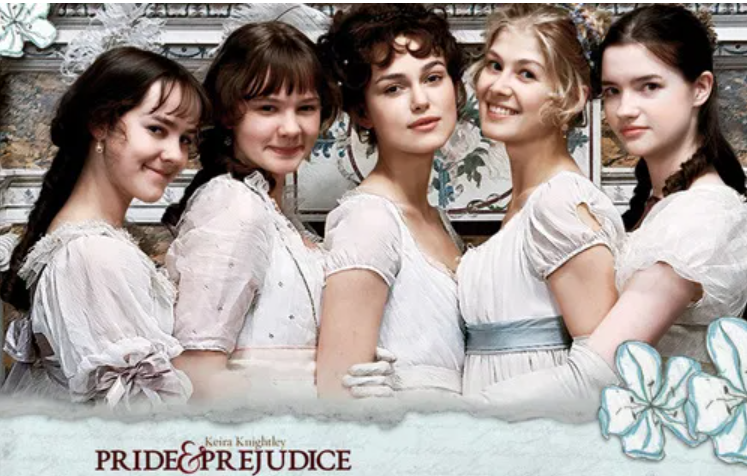 Pride and Prejudice is the original title of Jane Austen’s 1813 work. Her most famous novel is Pride and Prejudice, finished in 1797 and published only in 1813. The life of the Bennet family, who live in Longbourne, England, is disrupted when a young nobleman, Mr. Bingley, moves near their home. Mrs. Bennet, who aims to marry her daughters to rich bachelors, tries to introduce the girls to the wealthy man. This will give rise to tormented love stories, stories of misunderstandings dictated by the pride and prejudice of the main characters – first and foremost Elizabeth and Mr. Darcy – who will only find a happy ending in the end.

The main themes addressed in the book are those that we find in all novels set between 700 and 800: marriage: is seen in a qualitative perspective because at the time the unions were dictated by the need for self-affirmation and security that gives true feelings.

In particular, the relationship between the Bennet spouses and the marriage between Charlotte and Mr Collins is strongly criticized by the author. The relations between the two sexes, always conflictual and very complex. The role of women, often marginalized by society and permanently divided between the desire to assert themselves and that of looking after the family to which they are inevitably destined.

There are many protagonists in Austen’s book, but surely it is the women who dominate the scene trying to express their complexities and their deepest intimacies. Let’s see the main ones:.

• Elizabeth Bennet, called Lizzy: undisputed protagonist; Mr. Bennet dotes on her. Her sympathy, frankness and Lizzy’s determination won over Darcy, a haughty man, but ultimately loyal and good. Although she has many merits, she is conditioned by others and tends to judge people’s sympathy and antipathy on the basis of prejudice, as happened with Darcy. She is a modern and ironic character, who embodies the sweet and sensitive woman but also strong and intelligent.

• Fitz-William Darcy: the gentleman that all women in the world could fall in love with, with beautiful features and of noble appearance. At first he appears as a negative character, but his character is very different and it will be discovered only later that he is an understanding, benevolent and sensitive man who hides an unexpected tenderness.

• Charles Bingley: A young man whose wealth makes him a good match for any girl. Very nice and intelligent, initially falls in love with Jane but their love will suffer a few small missteps before reaching completion.

• Jane Bennet: She is the most beautiful of her five sisters, not only for her appearance but also for her character. A haunting romance begins with Mr. Bingley.

• Mr Bennet: a singular man, for whom one can only feel sympathy. Strongly cynical and disillusioned by the world.

• Mrs Bennet: mother of five daughters, her only occupation is to make them marry, possibly with rich parties. A frivolous character but able to infuse joy.

• Mary Bennet: third child of the Bennet sisters. Person who devotes her time to a sterile study. A character often despised and put aside by her own family because it is considered heavy.

• Catherine Bennet: 4th daughter of the Bennet family, also called Kitty, has a strong bond with her sister Lydia.

• Lydia Bennet: The youngest of the Bennet sisters, she is barely sixteen years old but already participates in life in society. Very mature and intelligent, she runs into Wickam, whose meeting, in addition to making her family take a pity, also brings her a dishonorable reputation, which risks jeopardizing the marriages of Jane and Elizabeth. Darcy tries to solve the scandal so he can marry Elizabeth.

The story takes place in England in the typical environments of the English bourgeoisie in which the author is placed.

The Bingley estate is one of the main locations of the novel, surrounded by a wonderful garden. The century is between 1700 and 1800, the very century in which the writer lived that is deeply influenced by the issues and problems of that period.

The book is enjoyable, ironic and hilarious, as well as engaging. Jane Austen is attentive to the ordinary things, feelings and characters of ordinary life and has the ability to provoke a feeling of impatience in the reader that is the greatest gift a storyteller can have.

The story is a classic love story and tells us about the romance between Elizabeth and Darcy whose relationships are not easy at the beginning because the social barriers put them in contrast.

On one hand there is the pride of Darcy who suffers a terrible blow when he realizes that he is in love with a woman of lower class and with so little “worthy” kinship. On the other hand, there is Elizabeth’s prejudice against a man who at first considered her barely passable and who later requested her in marriage in such an offensive way.

Both, however, in the course of history grow inwardly, they change their minds and realize their mistakes.

The text, in addition to investigating the complexity of relations between the sexes, marriage and women, is a perennial struggle between the prejudices of society and the pride of the characters, who seem not to want to give in.

Often, women care about modulating their actions depending on things it is convenient to do or not do. Their marriages are strongly influenced by the desire to make a real deal regardless of feelings. This is one of the issues most dear to the author, who strongly criticizes this way of doing things and does not consider it worthy of such an attitude. Moreover, the woman tries to assert herself in society and to have a role: for this reason the women of the novel are so ironic and intelligent, just to show that they have nothing less than men.

WHAT IS CLIMATE CHANGE? HOW IS IT AFFECTING ITALY?

How to construct Relationships